Disorientation and anger are feelings that can be paralysing but a driving power as well. The members of RETURNER from Düsseldorf, Germany have travelled down this road, too, but they’re living up to the demand to continuously try new things and challenge themselves. The songs on their new EP ‘I Once Cared’, produced by Daan Nieboer of 18 MILES in Amsterdam, are shaped by backlashes, insecurity and the fight against the resulting lethargy.

With their self-titled EP and the accompanying music video for the track ‘Choices’, that premiered exclusively on MoreCore.de, RETURNER sent their first sign of life in late summer 2016. In 2017, the single ‘It Ends With Me’ raised the attention once more.

The songs on ‘I Once Cared’ came into existence in tumultuous two years. For different reasons the band was continuously thrown back. Finally, they didn’t just lose a guitarist but also their practise space and their very own recording studio. After RETURNER had decided to continue as a four-piece and written new songs with this line-up, they went back into the studio in spring 2019 with Daan Nieboer at Cornerstone Audio in the Netherlands. Nieboer and the band knew each other from shows they had played together with his old band 18 MILES. “We were all huge fans of 18 MILES and Daan told us at a show that he was keen on working with us. And at the time we started looking for a studio, it didn’t take long until we decided for him!”, RETURNER frontman Maik Krause is reports.

The result of these recordings, the EP ‘I Once Cared’ is a dark and uncompromising settlement with the past but also a relentless view on the self: ‘For You’ is describing the constant fear that even the best times are doomed to come to an end. ‘Lost Inside My Head’ is the realization of having lost control and having become a threat for oneself and the environment. ‘Making Memories’ is about the feeling to be stuck in a certain phase of life and not being strong enough to take the necessary steps for a change.

For fans of enthralling and emotional hardcore with a certain touch of metal (COUNTERPARTS, THE GHOST INSIDE, IT PREVAILS, STRAY FROM THE PATH). 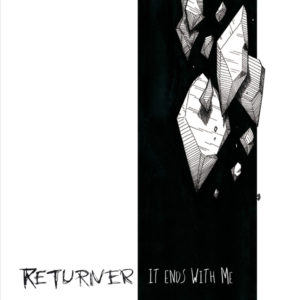 It Ends With Me

RETURNER’s single ‘It Ends With Me’ proves their impressive talents and provides a promising glimpse into the future. Their sound includes emotional guitar riffs with personal and heartfelt lyrics. The members of RETURNER are living up to the demand to continuously try new things and challenge themselves. The songs on their new EP ‘I Once Cared’, produced by Daan Nieboer of 18 MILES in Amsterdam, are shaped by backlashes, insecurity and the fight against the resulting lethargy.