„I am constantly searching for a place to keep my memory.“ The debut album of the melodic hardcore quintet MEL T. EYES form southern Germany deals with the need for nostalgia, the romanticisation of the past as well as the urgency to be freed from it in order to create new ways of thinking. On ‘Dwellers’ musical skills meet up substantial depth regarding the content. It’s about the anxiety and confusion of young adults but also about the message that there is always a way out of the apparent dead end street.

Originally founded as a metal band by guitarist Aaron Drechsler and drummer Nils Einfeldt, the band soon starts to turn towards metalcore. When Ali Orgey (vocals), Cedric Roser (guitar) and Daniel Bauer (bass) finally join the combo and bring in some fresh ideas and influences, they reinvent themselves once more and start making music together under the name MEL T. EYES since 2014. After a single, an EP and shows with LANDSCAPES, ALL FOR NOTHING, NAPOELON and BREAK EVEN, it’s finally time to go on the first long-player. MEL T. EYES recorded and produced the songs themselves but for mixing and mastering they hired no one less than Aljoscha Sieg who added the right sound and boom to the recordings. For the band, the work on the album was all about a clear step forward: “’Dwellers’ is our debut album therefore it’s our first real release. In contrast to earlier outputs, we totally changed the approach to our work. First of all, we chose a quite expensive, professional production over cheaper alternatives. Furthermore we thought out a concept for the album as well as the plan to release our music through a label.”

With regards to the content, the MEL T. EYES debut is evolving around the term ‘dweller’, defined as a person that is inhabiting a place or condition. ‘To dwell’ in this case means to rest in a place or a certain state of mind. The band itself describes the core of the idea the following: “The topic of the LP is turning around the obsessive dwelling in the past and the connected romantic-melancholic idea of nostalgia. For fear of the cold reality the dweller escapes into a pipe dream but he’s still in a constant conflict with himself.” The songs ‘Retrospect’ and ‘Engraved’ represent the different points of view on this topic: “Both tracks describe the dweller from different perspectives. While ‘Engraved’ is following a rather melancholic idea, namely to live with the anxiety to not being able to preserve all memories, the protagonist approaches the topic in ‘Retrospect’ in a much more positive way. He realises that he’s stuck in an infinite loop and that running away from reality is not the solution.”

While MEL T. EYES pick up the issues of nostalgia and being stuck in the past, their sound is far from being regressive. The band itself couldn’t have come up with a better description than emotional hardcore and as aid to orientation influences like COUNTERPARTS, HUNDREDTH and STICK TO YOU GUNS could be named. Nevertheless originality and high standards were the supreme goal for ‘Dwellers’: “We try to look at hardcore music more openly and want to connect fresh ideas with the old school. We try to not be just the next band and quest to find our own niche.” 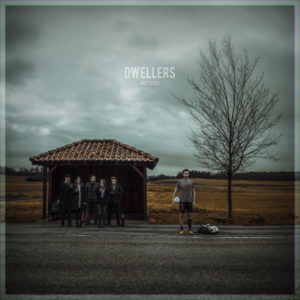 The debut album of the melodic hardcore quintet MEL T. EYES form southern Germany deals with the need for nostalgia, the romanticisation of the past as well as the urgency to be freed from it in order to create new ways of thinking.