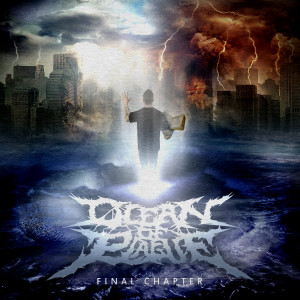 The path of the devoted musician is long and winding, littered with a number of highs and lows. This nonetheless applies to OCEAN OF PLAGUE, of course. But with the vision to explore new avenues, the circle around the five musicians was completed in 2012 and rhetoric taken into action. The result is a mixture of modern, fresh (death-) metal with hardcore elements, completed by a fresh breeze of progressive.

This mixture of opposing elements is also represented by the band’s name: With the word ‘ocean’ most people associate the element water and life in general, plus aspiration, freedom, infinity, relaxation and beauty, what is musically expressed by atmospheric, thrilling and catchy melodies with a high recognition value. ‘Plague’ is meant to be the antipode and represents the forceful riffing style, whose power seems to be relentless.

After the recording of the 7-track EP 'Existence Sold' at the prestigious Iguana Studios in Freiburg (i.a. Necrophagist), the result received above average criticism. The songs were presented live to the public shortly after, when the band started to play shows and left its first marks on the map.

Beyond that, OCEAN OF PLAGUE were within the top 20 out of 2500 international applicants for the New Blood Award of the Summerbreeze Festival and also the first endorsement deals came along.

Finally at the end of their first year on stage, OCEAN OF PLAGUE were able to look back on an impressive number of shows, a well-earned faithful fan-base and support slots for national and international sizes like TEXAS IN JULY (USA), HEART OF A COWARD (UK), SILENT SCREAMS (UK), HIS STATUE FALLS (GER), MADISON AFFAIR (GER), ALLFACESDOWN (AT), BLACK BOMB A (FR), HILLS HAVE EYES (P), MYRA (GER), A TRAITOR LIKE JUDAS (GER), to name a few.

In 2013 OCEAN OF PLAGUE took the next step by writing their first full-length and focussed mainly on the album-production. As the pre-production was completed by the band itself, only the fine-tuning was undertaken by Downforce Recordings in Erlangen. The outcome is called 'Final Chapter' consisting of ten tracks, released worldwide via REDFIELD DIGITAL (a division of REDFIELD RECORDS) in summer 2014. The topic reflects the evolution of the band as human beings and as musicians. It includes the characteristics of their established but improved song-writing, unified with the maturity to risk something new. The first single called 'Final Chapter', featuring Carlo form Breakdown Of Sanity, was released with the band’s first lyric video.

With the vision to explore new avenues, the circle around the five musicians was completed in 2012 and rhetoric taken into action. The result is a mixture of modern, fresh (death-) metal with hardcore elements, completed by a fresh breeze of progressive.