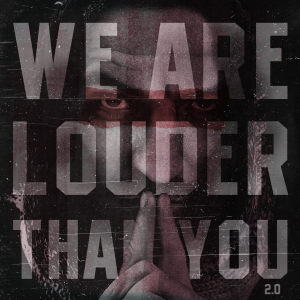 We’re back! We’re back for a reason!

After last year’s successful premiere, it’s time to bring things to the next level – because even in the second round:
We are louder than you!

The compilation We Are Louder Than You 2.0 contains 15 bands from countries all over the world, that maybe not very popular for their music scene, but we would like to point out, that these countries also have tons of amazing bands you definitely need to check out – with a little bit of help from us!

Of course we still think that compassion is one of the most important things in the world. So like we did in the last year, we will donate 100 % of the income of this compilation to the Hardcore Help Foundation, which is a non-profit humanitarian organization ran by members of the hardcore/punk community. HHF is part of a registered association (Flotte e.V.) in Germany. They collect merchandise and donations to help people in need. At the moment the HHF has four main projects in Kenya, Haiti and Germany.

1. Everyone Likes Cathleen (Mexico) – Dispersed I Am

We have no idea who Cathleen is, but we sure know: Everyone Likes Cathleen rules! The band formed in 2011 in Mexico City and as they don´t hesitate, they released their first album 'Through The Void' later the same year. The song 'Dispersed I Am' has nothing to do with Yoda but is from they current record 'Trial'.
www.everyonelikescathleen.com

Heavy metal music meets electronic melodies: Claps For Caroline from Hungary like to party – with brute shouts, soft hymns and electronic sounds. The quintet celebrates since 2010 and also released their first EP back then. Their song 'Prince Without Crown' arises from their new EP called 'Forbidden'. www.facebook.com/clapsforcaroline

I, Revival from Malaysia were formed in 2011 to create music as a way to express their emotions and love for music. Playing metalcore that is influenced by bands like August Burns Red and Parkway Drive, the band released its debut album ‘Variations’ in 2012. Since then I, Revival shared stages witch acts like Soulfly, Unearth and Set Your Goals, played the nationwide ‘Home Tour’ in 2013 and are now back in the studio to work on a new EP. www.facebook.com/irevival

Watch out, we are sure that you will fall into Rise To The Baits trap! The five-piece metalcore band from Latvia plies its dreadful trade since 2012 and released its debut EP ‚Nemesis‘ in September 2013. Rise To The Bait crossing multiple heavy metal sub-genres, such as melodic metalcore, post hardcore and progressive metal. While the guys are working on new material, let them allure you with the single 'I Will Take My Crown‘ that is also supported by their first music video! www.facebook.com/risetothebait

Mesdames et Messieurs, we proudly present one of the coolest metalcore exports from France, straight from the city of love: Kadinja formed in 2013 and were formerly known as Perspectives. Even though they are still in an early stage, they have already released their first EP, that they presented at a sold out release show. Listen to their new song 'Henry Call Mash Yes' and don´t miss out on the video that goes with it. Amuse-toi! www.facebook.com/KADINJA

As none of the guys is called Luke, we are pretty sure that Darth Vader is not their father, but Skywalker is a pretty cool name anyway. From now on the Czech Republic is not only known for its delicious beer but also for finest hardcore music: Skywalker was founded in 2010 and combines hardcore with classic 90's punk rock and even some hip-hop elements. They have already released three EPs and toured through various cities in Czech, Slovakia, Germany, Austria and even Canada. Don´t miss their song 'Survival' on their brand new record 'Liberty Island'! www.skywalkerhc.com

7. Despite Everything (Greece) – Throwing Stones Ain´t No Rocket Science

Hands up for Greek Punkrock! Despite Everything from Athens are sharing stages, mics, inflatable beds and the same passion for long drives and punk rock since 2008 and just released their first record 'The Dawn Chorus'. But most of the time they do what they do best: touring. The band has played shows around Europe, the USA and Canada, including all the dirtiest squats, basements, garages and bars in town. Grab a brick and let their song 'Throwing Stones Ain´t No Rocket Science‘ inspire you! www.facebook.com/despiteeverythingmusic

Be sure that we are honest when we say: You must check out Wounds Never Lie from Israel! Founded in late 2007 the five guys devote themselves to metalcore and released the re-issued version of their first EP 'Me, An Open Field And A Hurricane' back in 2012. 'Blind Kids, Proud Parents' is their latest single. Start the player and join the band on their favourite activities: friends, beer, breakdowns and having pure fun! www.facebook.com/woundsneverlie

The Spanish band started in 2007 at the Costa Brava and defines itself as 'modern metal'. But they also convince with a decent helping of melodic metalcore. One year after they started, they released their first EP and in 2011 their debut album 'From Death Comes Life'. Far´n´Hate is for sure a band that loves touring - so let´s start the moshpit and be prepared for their second full-length album! www.facebook.com/FarnHate

Raunchy riffs, brutal breakdowns, alienating ambience and mammoth melodies: All that is brought to you by the four-piece band Coat Of Arms from Abu Dhabi. Five years ago they released their debut album and started a countrywide DIY tour. With their latest record 'Sun & Satellites' they try a different track to set a new movement in the genre of metal music. Curious how that sounds? Then give 'Composure To Remain' a listen! www.facebook.com/coatofarmsband

The band name may not sound as evil as the London based serial killer back in 1888 but Jack The Flipper’s metalcore sound is brutal, too: The Russian combo was founded in 2009 and released its first music in 2012 as well as two video clips. After extensive touring and sharing stages with international big names, the debut album 'Masquerade‘ was published in late 2013. ’Save Our Souls’ is one of the eleven tracks. www.facebook.com/JackTheFlipperBand

12. Legacy Of Athena (Indonesia) - Gold, Glory, And The Gospel

Spartans! Give Legacy Of Athena a listen! The metalcore band from Indonesia formed in late 2011 and discovered back then: Music makes the difference! Their band name is inspired by the Athenian spirit of democracy and the ambition to gain all the prosperities at that time. The five guys think, that innovation, creativity and hard work are the path to success. 'Gold, Glory And The Gospel' is their latest single. www.facebook.com/LegacyOfAthena

Three members, three countries, three continents: The Trashcoreband MyManMike is mainly based in Seoul, South Korea but also consists of members from the USA and France. Get in touch with the super crazy and brute sound of 'Just A Drag' with lyrics in English and French that will make you all dizzy. We promise. www.facebook.com/Mymanmike666

Confronto from Brazil are into metal and hardcore and call themselves 'The Latin American Metal Revolution'. They are recognized by their attitudes, battles and victories as a band that rose from the suburban streets of Rio de Janeiro and want to prove, that Brazilian metal is not dead. So raise your fists and enjoy the song 'Imortal' - that they also recorded in Portuguese - from their same named record. www.facebook.com/confrontobrazil

Wrong Way To Die from Italy make sure to kick your asses with the song 'Coin Toss' from their new record 'Ingrates', that offers an unexpected and unconventional sound that continuously shifts from furious and fast riffing into prog/ambient melodic-filled sections, all blended with hardcore/metalcore scream vocals. The band's name is a dedication to everyone, who died prematurely – but Wrong Way To Die are for sure full of beans! www.facebook.com/wrongwaytodie 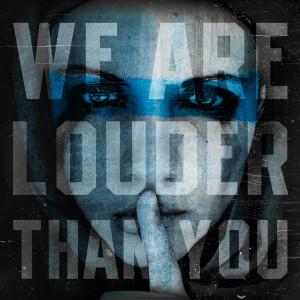 We Are Louder Than You

By getting submissions from all over the world, we decided to start Redfield Digital with this extraordinary compilation featuring some of the most promising international artists from countries which are not that popular for their music-scene.