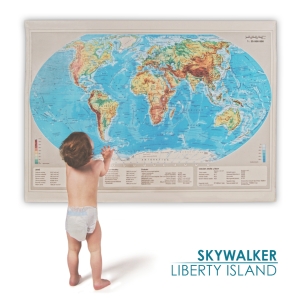 If you cross the borders of the bigger music-countries, let’s name Great Britain, the United States and Germany among others, and take a look at the ones that are less popular for their flourishing music scene, there is always a higher chance to discover artists, who have their very own approach to the music they play. This doesn’t mean that SKYWALKER are here to reinvent their scene but their open minded perspective on hardcore music is nevertheless refreshing and unique.

SKYWALKER from Prague, Czech Republic were founded in the summer of 2010. In the same year, the guys recorded their first EP "Hic Sunt Leones" that came out just before their first show. Following their own statement, it was not received very well, unlike their live sets that they played since January 2011.

Summer 2011 saw the release of SKYWALKER’s second EP "Arkham" and was received much better in the Czech hardcore/metalcore scene. The band then set off for a club tour, playing in many Czech cities and also a couple of shows in Slovakia.

In 2012, the band continued to play shows, even got to Germany. Nearing the end of the year, the third EP "Babylon" was released and was somewhat a breakthrough for the band - both thanks to the sound of the EP that combines hardcore with classic 90's punk rock and some hip-hop elements, and its success - many reviewers and fans within the Czech/Slovak scene consider it to be one of the best pieces ever to come out of domestic hardcore music. Aside from playing in clubs, the band played numerous summer festivals, went on tour to Slovakia and Austria, in September 2013 even to Canada.

SKWALKER have shared the stage with names like: DEEZ NUTS, FOR THE FALLEN DREAMS, FIRST BLOOD, DEFEATER, PAY NO RESPECT, TILL WE DROP, AS ENEMIES ARISE, ABHORRENCE, NO SECOND CHANCE, POINT BLANK RANGE and many more.

If you cross the borders of the bigger music-countries there is always a chance to discover artists, who have their very own approach to music. SKYWALKER will not reinvent their scene but their open minded perspective on hardcore music is nevertheless refreshing and unique.