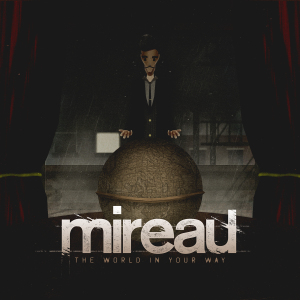 The World In Your Way

MIREAU formed in mid 2011 in Belfast, Northern Ireland and whilst trying to solidify a line-up where each member had the passion and dream to go further with this band than a lot of their peers back home, they recorded two tracks which got them a strong following in Northern Ireland and landed them support slots with some of the UK’s current biggest bands such as YOUNG GUNS and DEAF HAVANA.

Wanting to set their sights higher, MIREAU knew taking their songs to a recording studio in Ireland just wasn’t going to cut it and decided it was time to take what they believed to be a step in the right direction. That step saw them flying over to Orlando, Florida, self-fund and record their debut album with Cameron Mizell of Chango Studios who has famously worked with some of the scenes biggest success stories such as SLEEPING WITH SIRENS, MEMPHIS MAY FIRE and WOE, IS ME to name a few.

These are bands not only did MIREAU look up to and take inspiration from, but their albums had the polished feel to them that they had been after for so long. Not only was recording an album with a producer that they admire and got the chance to become close friends with a great experience, for the band it was also incredible to get on first name basis with members of MEMPHIS MAY FIRE and WOE, IS ME, to the extent of Matty Mullins (MMF) and Austin Thornton (ex-WIM) asking them if they could do vocals on their album – that was pretty insane!

One of the best anecdotes about MIREAU’s time spent in Florida was one night they went to see a couple of bands (MY TICKET HOME and EYES SET TO KILL) play in Orlando. The guys decided to print out flyers and hand them out at the gig to let people know who they are, that they were recording with Cameron and their social media links so they could check them out. After the gig was over the band got its first glimpse into fame when more people were coming to them to ask for photos and autographs than they were for the bands that were playing, based on the fact they were a ‘scene’ band that was from Ireland. Cameron said he had never seen anything like that before and with the combination of them being Irish and having a great album, the sky’s for them and now MIREAU will put this theory into practise.

The result of that memorable trip to Florida is called “The World In Your Way” and will be released digitally worldwide on December 1, 2014. With that album the young Irish are ready to take the next step in their career as a young band with a lot to prove and the potential to take more than just their scene by storm.

MIREAU formed in mid 2011 in Belfast, Northern Ireland and whilst trying to solidify a line-up where each member had the passion and dream to go further with this band than a lot of their peers back home.