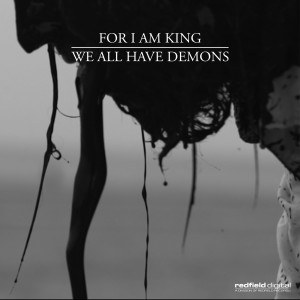 FOR I AM KING

We All Have Demons

Amsterdam based FOR I AM KING combine furious metal riffs with distinctive melodies, pounding drums and female vocals. Their message is simple: ‘just metal’, based on friendship, work ethic and passion. Since forming in September 2013, FOR I AM KING have quickly built up a strong following and are well on their way to reach their goals!

To give the world a first glimpse of their music and potential, the debut single ‘The Beast Within’ was released in October 2013. The song gathered prestigious feedback from the press and the public for its technical and musical mastery. Before playing a single show, FOR I AM KING recorded the debut EP ‘Revengeance’ which was released in May 2014.

In January 2014, FOR I AM KING played their first show and quickly started making a name for themselves in the Dutch metal scene. The band achieved a highlight in May, when a professional jury selected FOR I AM KING (among 120 other acts) out of more than 1500 participating bands for a spot on the biggest traveling music festival of the Netherlands ‘de Popronde’.

In June FOR I AM KING played at the Dutch festival ‘Jera on Air’ and the remainder of the year they did numerous shows in Belgium, Germany and the Netherlands. FOR I AM KING toured the UK in early 2015 were a part of the Shake The Earth-tour. Finally in July, FOR I AM KING played the Headbangers Stage of the almighty Wacken Open Air in Germany.

FOR I AM KING are writing their first full-length record as we speak and to give the world a glimpse on their new sound, the new singles ‘This is a Warning’ and ‘We All Have Demons’ are released worldwide through Redfield Digital.

Playing more shows all through Europe and the UK, with their two new tracks in hand and their first full-length soon, FOR I AM KING are ready for you!
It’s simple: just metal!

FOR I AM KING

This Is A Warning

Amsterdam based FOR I AM KING combine furious metal riffs with distinctive melodies, pounding drums and female vocals. Their message is simple: ‘just metal’.

FOR I AM KING (Netherlands)

Amsterdam based FOR I AM KING combine furious metal riffs with distinctive melodies, pounding drums and female vocals. Their message is simple: ‘just metal’.