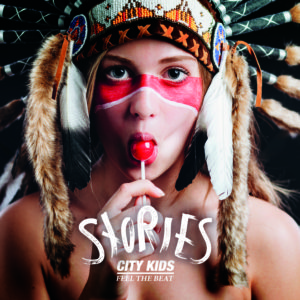 CITY KIDS FEEL THE BEAT tell their very own story. It’s one where the listener immediately finds himself: It’s a story about being grown up, although that never was the plan, and how the resulting responsibility keeps on being almost too much load for one back. First of all it’s a story about the small and big challenges, the kicks and stones that escort our way and now round up the topic for the new EP ‘Stories’.

The since 2011 operating quintet from Ulm, Germany has not just grown thematically since the first EP ‘Kids’ (2015), also the sound the is more mature but without lacking any of the energy, melody or euphoria of the early days. The guys still feel the most comfortable between A DAY TO REMEMBER, BLINK 182 and FOUR YEAR STRONG. Sweat and a big smile are still guaranteed – in front and on stage. On the new EP and with song like ‘iRambo’, ‘Blue Version’ or ‘Stories’ CITY KIDS FEEL THE BEAT are building a bridge from their own beginnings to the point where, or rather what they are now: grown up.

The song ‘iRambo’ is not just finding the right words, that we lack so often, it’s a hit into the bulls eye of the emotional life. Anger, anxiety and a call for attention are the core problems when it comes to the topic of mobbing. ‘iRambo’ is supposed to electrify, call for a break out and release. Young people are struggling with their role in life but most of all with others. Such fights can be won but also be lost in no time.
Crossing borders, breaking rules, taking your life in your own hands – with these topics ‘Blue Version’ is tuning into a bang. Rules tend to have the effect that you apply to them and disregard thinking independently. In ‘Blue Version’ the given way of life, that parents may live, collide with the “can’t bothered” phase of a teenager. Everyone can be lead but the new, forbidden and the discovery of love is part of growing up. Experiences turn us into that person that we like to look back on after a life that we independently chose ourselves. And we keep on standing up and fall, stand up and fall once more and then we stand up again. Standing up is the result of rationality, but also part of changing the perspective.
This new perspective and their own way CITY KIDS FEEL THE BEAT always have in focus. That as well has made the guys what they are now: A band that is always up for more, better, bigger and faster but first of all more mature. With ‘Stories’ the five young men take us on their way into the here and now.

CITY KIDS FEEL THE BEAT tell their very own story. First of all it’s a story about the small and big challenges, the kicks and stones that escort our way and now round up the topic for the new EP ‘Stories’.